OUR COURSES IN THE ALPS 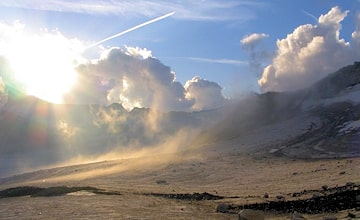 The first region with a Mediterranean climate and flora that you find in Europe travelling south Lake Garda brings us the gift of a last and unexpected breath of Mediterranean before reaching the passageways of the Alps heading north. Here, the intense blue of Lake touches the mountains; the olive branches speak with the wind, and the lemons mature in the sun. At one time, Goethe, Kafka, Mann and Rilke found inspiration for their genius precisely here. Today, the same atmosphere and natural beauty has remained intact and has become the ideal scenario for a vacation where it is both easy to relax and have fun: sailing and wind surfing on the waves, mountain biking and rock climbing the mountains or canyoning along exciting torrent rapids are just some of the daily sports in a world where it is easy to run into old castles and where fairy tales are celebrated every year on magic, mid-summer's night. Lake Garda Trentino is all that: a world at man's dimensions where the flavours of food, wine and olive oil are real.

The history of the Alpine Guides in Trentino began with the birth of Alpinism in the Alps. Its protagonists have been explorers from England, Germany, Austria and local mountain guides. The mountain guide' s profession has been subject to changes and development. Until the end of the 18 th century they used to be the guides of rich aristocrats keen on granting their name to a famous peak or wall. The modern alpine guide however, is a professional with not only a profound knowledge of the manifold traditional and modern alpine techniques but is also an expert in nature, culture and history. In those days and at present, the mountain guides are the authors of national and international alpine history. The Trentino Alpine Guide Association is preparing the guides for their professional life. In Trentino 200 alpine guides are registered; they are being distributed among 12 Alpine Schools and/or other types of guides' associations. Practically in each valley of Trentino you can find an association of mountain guides which can provide information and advice. The Alpine Schools or guides' associations are offering a vast range of activities and courses which can be booked directly. With a mountain guide on your side, a day in the mountains, a simple excursion through the forests of our National Parks or a climbing tour, will become an unforgettable experience. The alpine guides of Trentino are publishing an annual program offering daily or weekly excursions events which are suitable for everyone who has already been in the mountains but is mainly addressing those who want to make first contact with them. The program includes excursions, hiking tours, climbing tours, high alpine treks, rock climbing, courses, canyoning or excursions in the National Parks with special park guides. 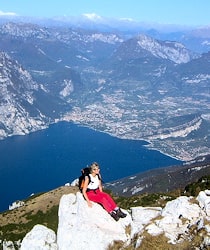 Lake Garda is the largest lake in Italy. It is located in the North, about half-way between Venice and Milan. It is in an alpine region and was formed by glaciers at the end of the last ice age. Lake Garda and its shoreline are divided between the provinces of Verona (to the south-east), Brescia (south-west), and Trento (north). Being easily accessible from the north via the Brenner pass, Lake Garda has become a major tourist destination including a number of exclusive hotels and resorts along its shore. The Northern part is narrower and surrounded by mountains, the majority of which belong to the Gruppo del Baldo. The shape is typical of a moraine valley, probably having been formed under the action of a Paleolithic glacier. Although traces of the glacier's actions are evident today, in more recent years it has been hypothesized that the glacier occupied an already existing depression, created by stream erosion 5 to 6 million years ago. The main tributary is the Sarca river, while the only emissary is the Mincio River. Wildlife include the "Carpio", a species of salmon is living exclusively in Lake Garda and in some Swiss alpine lakes, usually caught in fine nets since it is a deep-water zooplankton eater. Popular activities include windsurfing, hiking, canyoning and rock climbing. World Cup rock climbing competitions are held on the towns outdoor artificial wall of Arco. Mountainbiking is popular and international bikers flock to the region.

The Dolomites are a section of the Alps. They are located for the most in the province of Belluno, the rest in the provinces of Bolzano-Bozen and Trento. Conventionally they extend from the Adige river in the west to the Piave valley in the east, the northern and southern borders are defined by the Puster Valley and the Sugana Valley. But the Mountain chain spread also over the Piave river to the east; and far away over the Adige river to the west is the Brenta Group; there is also another smaller group called Piccole Dolomiti located between the Provinces of Trento and Vicenza. One national park and many other regional parks are located in the area. During the First World War the line between the Italian and Austro-Hungarian forces ran through the Alps. There are open-air war museums at Cinque Torri and Mount Lagazuoi. Many people visit the area to climb the Vie ferrate. These are protected paths which were first created during the First World War. A number of long distance footpaths run across the mountains, which are called "Alte vie". Such long trails, which are numbered from 1 to 8, require at least a week to be walked through and are served by numerous "Rifugi". The first and, perhaps, most renowned is the Alta Via 1. The region is commonly divided into the Western (Brenta) and Eastern Dolomites, separated by a line following the Valle dell' Adige. The range includes more than forty glaciers. The name is derived from the famous French mineralogist Deodat Gratet de Dolomieu who was the first to describe the rock, dolomite, a type of carbonate rock which is responsible for the characteristic shapes and colour of these mountains. A tourist mecca, are famous for skiing in the winter months and rock climbing, daily excursions, hiking and canyoning. Free climbing has been a tradition since 1887, when 17-year-old Georg Winkler soloed the first ascent of the pinnacles Vajolett. The main centres include: Rocca Pietore alongside the Marmolada glacier, which lies on the border of the Trentino-Alto Adige and Veneto regions, the small towns of Alleghe, Cortina d'Ampezzo, and the villages of Arabba, Ortisei and San Martino di Castrozza, as well as the whole of the Fassa, Gardena and Badia Valleys. 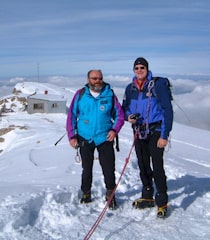 Marmolada is a mountain in Northeastern (just east of Trento) and the highest mountain of Trentino. The mountain is located about 70 miles north-northeast of Venice, from which it can be seen on a clear day. It consists of a ridge running west to east. Towards the south it breaks suddenly into sheer cliffs, forming a rock face several kilometres long. On the north side there is a comparatively flat glacier, the only large glacier in the Dolomites (the Marmolada Glacier, Ghiacciaio della Marmolada). The ridge is composed of several summits, decreasing in altitude from west to east: Punta Penia (3,343 m), Punta Rocca (3,309 m), Punta Ombretta (3,230 m), Monte Serauta (3,069 m), and Pizzo Serauta (3,035 m). An aerial tramway goes to the top of Punta Rocca. Paul Grohmann made the first ascent in 1864, along the north route. Before World War I, the border between Austria and Italy ran over Marmolada, so it formed part of the front line. Austrian soldiers were quartered in deep tunnels bored into the northern face's glacier, and Italian soldiers were quartered on the south face's rocky precipices. As glaciers retreat, soldiers' remains and belongings are occasionally discovered.

Hotel at Lake Garda Trentino - The internet magazine gardahotels.net has created a wide selection of some of the hotels and a list of Agencies which offer sports activities in the area of the Alps such as mountain bike, surf, rock climbing and via ferrata courses, mountaineering and hiking trips.

25 YEARS IN THE DOLOMITES ITALY